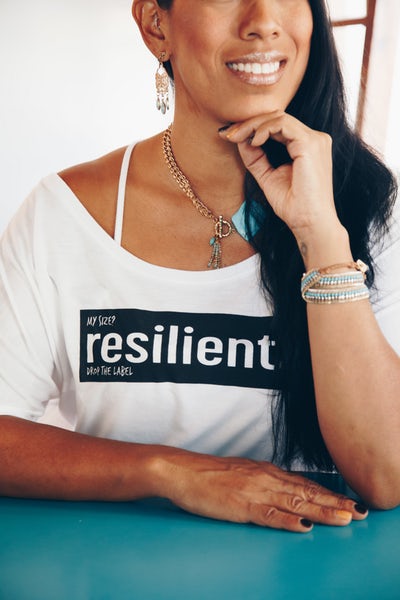 Dictionary.com defines resilient as: recovering readily from illness, depression, adversity, or the like; buoyant.

Some of the greatest stories ever told, at least in my estimation, are those in which the human spirit triumphs despite seemingly insurmountable odds. I’ve always been fascinated and emboldened by learning how someone survived tragedy, overcame a grave or “terminal” illness, or became a mega-success with limited education and resources.

If you have been following me for any length of time or know anything about me personally, you probably know I had a rough childhood punctuated by sexual and physical abuse, poverty, instability, and alcohol-fueled violence. This of course had far reaching consequences (40+ years) that I’ve only recently unraveled. My twenties were filled with a lot of confusion, mistakes, debt, and the search for something I couldn’t even articulate. I struggled to learn how to live on my own and be a single parent to my two little girls after my second divorce. I had no money management skills and ultimately filed for bankruptcy relief. I was also fired for the first time from my only source of income.

My thirties were full of some of my hardest personal challenges to date; however, I did meet and marry my third husband who I’m still married to today and in 2009, I gave birth to my youngest daughter. Still, if a decade could be defined by a theme, it would be the decade of loss: several miscarriages, the sudden death of my brother, his fiancé, and their unborn child that resulted in a criminal trial, and the loss of a life-long illusion that insulated me like Tyvek. In my late 30’s, my husband and I opened a restaurant that quickly found success but resulted in a loss of myself. And by the end of our 5-year run as restauranteurs, I was struggling with an increasing dependence on alcohol, and anxiety had me in a head lock that prevented me from swallowing solid food. My spiritual foundation was non-existent, my mindset was unrecognizable, and my health would soon also come under attack. It didn’t take a rocket scientist to point out that something had to give and finally, in my 40’s, I got into therapy and worked through those traumas through a system called EMDR along with traditional talk therapy. We ultimately sold the restaurant, and I had the “all clear” to launch my coaching practice I had trained for years prior. And the rest as they say, is history.

All of this is not to suggest that there were no happy times, quite the contrary. Many of these battles were also fought privately, and I imagine there were people in my life at that time who would find it surprising to read these words. And for the sake of time, I’ve drilled down to the primary bullet points to support this topic. But if my thirties were defined largely by loss, the overarching theme of my entire life could be defined as resilient.

In the article “The Art of Resilience,” Hara Estroff Marano writes, “At the heart of resilience is a belief in oneself – yet also a belief in something larger than oneself. Resilient people do not let adversity define them. They find resilience by moving towards a goal beyond themselves, transcending pain and grief by perceiving bad times as a temporary state of affairs… It’s possible to strengthen your inner self and your belief in yourself, to define yourself as capable and competent. It’s possible to fortify your psyche. It’s possible to develop a sense of mastery.”

From my earliest sense of myself, I’ve believed there was something out there meant for me and that I was a part of something greater, I just didn’t quite know what that was. Yet, there were many, many days when I couldn’t push myself further and I had to rely on simply being pulled onward. But through the worst of times, I knew what I was going through was temporary. I refused to believe that every bad decision and shameful experience made me a throw-away human. Every adversity did strengthen me and my belief in what I could endure.  And with the support of a good team, I’ve developed mastery along the way. Today, I can even go so far as to say I’m grateful for the opportunity for the hardships because through it, I’ve been able to help so many others and nothing feels better than that!