Resolutions:How they began and why they fail 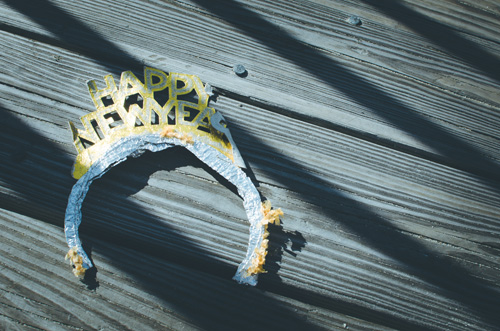 As another year quickly approaches a close, I too, am left with the desire to look back, to resurrect my proclamations I made on January 1, 2017, reflect on events, and of course, resolve to do a few things better, bigger, faster and more epic in the coming year.

I’m also struck with curiosity about the origins of the New Year’s resolution as well as whether this is an effective practice for lasting change. In my research into the custom, I found the tradition of celebrating the start of a new year to be around 4000 years old; however, it was originally celebrated by the Babylonians every March as an 11-day religious festival with different daily rituals occurring each day. During this time, they would promise to repay debt, return borrowed objects and either reaffirm loyalty to the current reigning king or crown a new one. If you kept your word, the gods smiled upon you and if you didn’t, well, let’s just say, Lucy had some ‘splainin to do.
Cut to 46 BC. Julius Caesar is in power and is of a mind to make a few changes, including the newly minted first day of the year, January 1st. January gets its name from the god, Janus who according to historical accounts was a two-faced god who looked backwards into the past year while simultaneously looking into the year ahead. Side note, but does anyone else believe Janus may have been a Gemini?

But I digress. The Romans were apparently quite fond of January and as such, offered up sacrifices and promises of upstanding behavior to the god for the coming year.

Even in Christian cultures, the practice of looking at the year’s worth of sin and resolving to do better in the year ahead dates back centuries.

While today we may no longer offer up livestock, crown a new king, or fear a vengeful god as the clock strikes midnight, many cultures, religious and secular groups alike still abide by a certain ritual of ringing in the new year. For many, it signals a re-birth if you will, of the soul, the mind, and a certain hopefulness of blessings and abundance to come. An estimated 45% of the American population will make some type of resolution beginning on January 1st. Not surprisingly, weight loss, fitness and smoking cessation top the list year in and year out (see what I did there?). That’s roughly 145 million people all vowing at once to shed fat, get fit and butt out. However, the CDC reports a third of US adults are obese today and cigarettes are still responsible for claiming the lives of more than 480,000 people each year. Only 8-10% of those making resolutions are successful in achieving their goals. This begs the question: why? I’ve compiled a short list of what I believe are the top reasons for this underwhelming statistic. Let’s strap on the protective head gear and have a look inside, shall we?


Whatever your New Year’s tradition is, and whether you choose to make any resolutions for the coming year, I believe the end of the year offers us the perfect time to do a little self-reflection.  Sometimes, we surprise ourselves and find out that we didn’t do too shabby after all. Other times, we recognize where we could’ve aimed a little higher. And that’s the good news: a new year means we get another chance to step up to the plate and give it a good swing if we choose. If you choose not to, that’s cool too. But you better plan your sacrificial offering now, just in case. I hear Janus likes Garnets.