A Womans Best Protection is a Little Money of Her Own 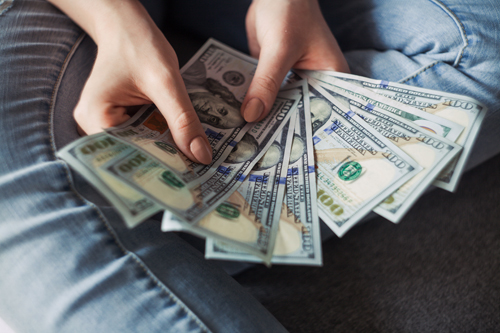 "A Woman’s Best Protection is a Little Money of Her Own"
-Clare Boothe Luce, American Author & US Ambassador

In the culture I grew up in, this simply wasn’t taught. For many generations, the women in my lineage have primarily been homemakers, and damn good ones at that. Southern cooks anyone? This isn’t unique, and neither is my upbringing. But the message I received, whether intentional or not, was that a woman’s value was largely in how well she kept a home and raised her children. It just wasn’t a thing for girls to be raised to have big dreams and goals. In fact, I vividly remember the day I told my dad I wanted to be a doctor when I grew up and he laughed at me. It hurt me terribly, the extent of which I’m still uncovering. He told me how smart I would need to be (I’m very intelligent, thank you very much), it would take years of school, I couldn’t do that and be a wife/mom, and lastly, we would never have the money for that kind of education. That was for “other” folks. I was 12. And I was crushed. The worst part? I believed it.

He said I needed to find a good man, with a steady job and make a good home. Have a couple kids and settle down. Well, who here is shocked to learn that I did just that? At 18. What does an 18-year-old know of the world she desires to make for herself or who the hell she even is at that point of her journey?? Very little I assure you. But my BELIEFS were that I needed to get married and have a baby, and my daughter was born 9 months after I said “I do” at an Elvis Chapel in Vegas. I know, #goals right?
My husband at the time was a good man. He had a good job. We were ok financially. And I made the nicest home I could for someone with limited life skills. I had a part time job that helped the family slightly, but on my own, I could’ve never supported us. I had no MARKETABLE skills. At least none I had discovered or cultivated yet. That was still many years in the future.

As is so often the case, the marriage fell apart. Again, who’s shocked? I didn’t have a clue how I would get by, but I’ve always had an unshakeable optimism, even through the darkest and most traumatic periods of my childhood. I also didn’t have a family in any kind of position to help me. So, I found a full-time job and moved my daughter and I into a tiny apartment. It was incredibly hard, and money was tight. Single parenting is not for the faint of heart! But life soon took on a more predictable pattern. Translation: I found myself in another relationship where it was all too easy to lean on a man for financial support. I believe psychologists refer to this as script or patterned family behavior. I see it as my limiting beliefs sabotaging what God intended when I was created. And fast forward to today after a lot of therapy, self-help and great coaches, I know I was created for abundance and a life as big as I can dream! But back then, I didn’t have the framework in place or the belief in myself to do it on my own. I didn’t know who I was or what I was capable of. I had no idea I could really make money and be financially free without a man by my side. I didn’t know my value exceeded being a mom and wife, both noble and worthy by the way!

Obviously, I’m extremely happy today and in a wonderful marriage. I have three amazing daughters, two of the cutest little “glam-kids” you’ve ever seen, and I love my life & life’s work. But I have a deeply spiritual desire to encourage young women to ask themselves, “why NOT me” and to be the one up ahead of them pulling them into the life they were meant to live. I desire to be the one illuminating the path so we may all see the essence of who we are.

Whether you’re a woman reading this or you’re a father of little girls, I urge you to be the voice of encouragement. Give life to dreams when she is brave enough to speak them aloud. Tell her she’s smart enough, good enough, can do big things, and where there’s a will, there is a way. Tell her anything is possible. Because isn’t it?